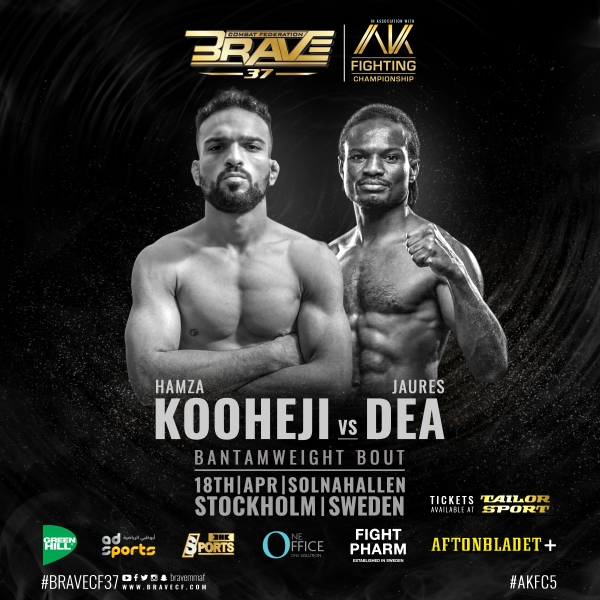 Juares “Crazy Cameroonian” Dea Gomez, 26, of Cameroon is set to make his BRAVE Combat Federation. He will be welcomed to the Bahrain-based mixed martial arts promotion at “BRAVE CF 37” by Hamza “The Pride of Bahrain” Kooheji, 27, of Bahrain.

BRAVE CF will hold “BRAVE CF 37” at Solnahallen in Stockholm, Sweden on April 18, 2020. It will be promoted in association with the local MMA powerhouse AK Fighting Championship.

“BRAVE CF 37” will be the first BRAVE CF event to take place in Sweden. The bout between Dea and Kooheji will be in the bantamweight division.

Dea has been competing professionally since 2017. Before joining in BRAVE CF, he competed in Hard Knox Fight Night, Phoenix Fighting Championship and UAE Warriors.

The Cameroonian MMA fighter is riding a four-bout winning streak. In 2019, he won four out of five fights.

Currently, Dea holds a professional MMA record of 6 wins, 2 losses, 0 draw and 1 No Contest. On the other hand, Kooheji has 9 wins and 2 losses.

Kooheji has been competing professionally since 2012. “BRAVE CF 37” marks his eighth outing in BRAVE CF.

‘ONE: Only the Brave’ results: Sittichai Sitsongpeenong vs David Kiria in Kallang, Singapore