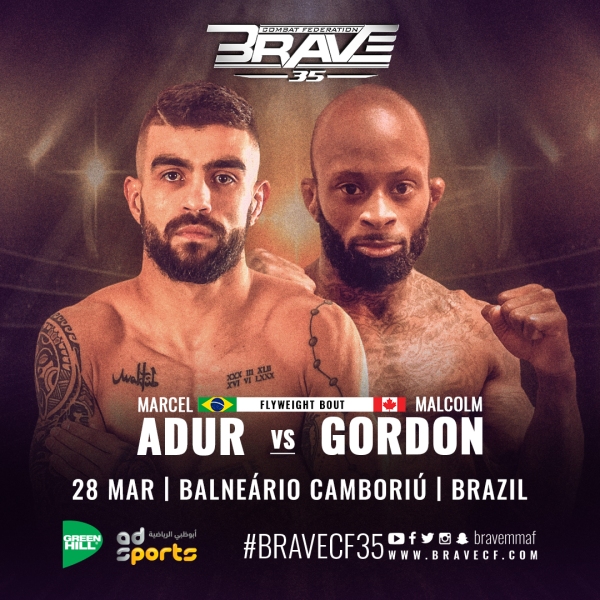 A bout between Marcel Adur, 38, of Balneário Camboriú, Santa Catarina, Brazil and Malcom “X” Gordon, 29, of London, Ontario, Canada has been booked for “BRAVE CF 35.” It will be a quarterfinal bout in the BRAVE Combat Federation Flyweight World Championship tournament.

BRAVE CF will hold “BRAVE CF 35” in Balneário Camboriú on March 28, 2020. It will be the first event of the Bahrain-based mixed martial arts promotion in Brazil to be promoted by the promotion outside of Curitiba and Belo Horizonte.

Competing professionally since 2014, Adur is going to his sixth appearance in BRAVE CF at “BRAVE CF 35.” He currently holds a professional MMA record of 15 wins and 5 losses.

This marks Adur’s third shot at the BRAVE CF Flyweight World Championship title. He was denied the first two due to events beyond his control.

In 2018, the match between Adur and Veliimurad Alkhasov, 28, of Grozny, Russia ended up not being valid for the title after the Russian contender failed to make weight. In 2019, the Brazilian contender’s fight against Jose “Shorty” Torres, 27, of Chicago, Illinois, United States  for the title as canceled last-minute after the American contender pulled from the card during the fight week.

On the other hand, Gordon is making his BRAVE CF debut at “BRAVE CF 35.” Born in Calgary, Alberta, Canada on May 19, 1990, he has been competing professionally since 2012.

Gordon is ranked number one in the flyweight division in Canada. He holds a professional MMA record of 12 wins and 3 losses and is currently on a four-bout winning streak.

All of Gordon’s four most recent wins are via either knockout or submission. He previously competed in Bellator MMA, Havoc Fighting Championship and Warrior Xtreme Cagefighting, among others.