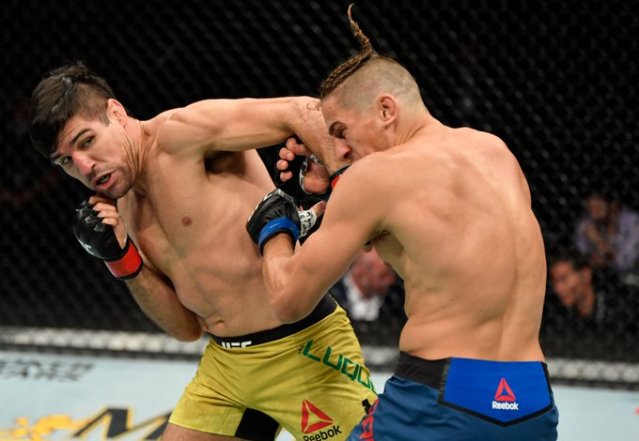 Vicente Luque, 28, Brasília, Distrito Federal, Brazil was one of the winners at “UFC 249.” It was the Brazilian mixed martial artist’s 11th victory in the MMA promotion Ultimate Fighting Championship, which is based in Las Vegas, Nevada, United States.

Featuring 11 MMA matches, “UFC 249” took place at the VyStar Veterans Memorial Arena in Jacksonville, Florida, USA on May 9, 2020. In the third bout of the evening, Luque fought Niko “The Hybrid” Price, 30, Cape Coral, Florida in the welterweight division.

Jason Herzog served as the referee. He put a stop to the contest after 3 minutes and 37 seconds in the third round when Luque knocked out Price via doctor stoppage.

The definition of the word WARRIOR. 👏 Give it up for @LuqueVicente and @HybridUFC putting in a shift tonight! #UFC249

The bout between Luque and Price at “UFC 249″ was a rematch. In their first encounter at “UFC Fight Night 129” on October 28, 2017, the Brazilian fighter submitted the Cape Coral native via brabo choke.

"I’m still here to be relevant and get up that division &eventually fight for that title. I still have a lot to improve, I’m 28 years old, I’m excited for this & I’m excited for how much I have to improve." –@VicenteLuqueMMA after his #UFC249 TKO win 🔊⬆️https://t.co/uNyG5io0Sr pic.twitter.com/LqZiwEZRNp