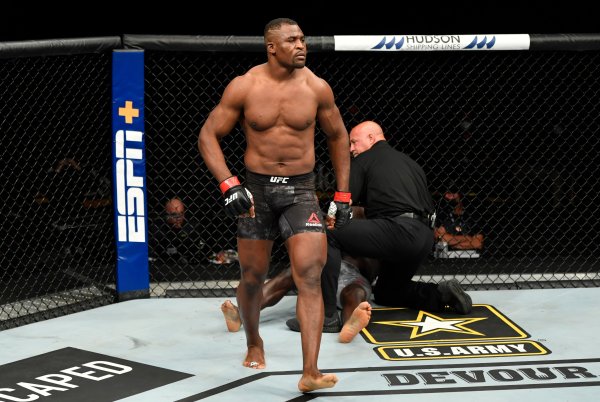 Francis “The Predator” Ngannou, 33, of Batié, Cameroon and Paris, France was one of the winners at “UFC 249.” It was the 10th victory of the Cameroonian-French mixed martial artist in the MMA promotion Ultimate Fighting Championship, which is based in Las Vegas, Nevada, United States.

Featuring 11 MMA matches, “UFC 249” took place at the VyStar Veterans Memorial Arena in Jacksonville, Florida, USA on May 9, 2020. In the ninth bout of the evening, Ngannou fought Jairzinho “Bigi Boy” Rozenstruik, 32, of Paramaribo, Suriname in the heavyweight division.

Dan Miragliotta served as the referee. He put a stop to the heavyweight contest after 20 seconds in the first round when Ngannou knocked out Rozenstruik via punches.

Be careful what you wish for when calling out @FrancisNgannou 😳 #UFC249

Winning at “UFC 249” improved the professional MMA record of Ngannou to 15 wins and 3 losses. On the other hand, Rozenstruik now has 10 wins and 1 loss.

Seven countries were represented at “UFC 249” namely were Brazil, Cameroon, Cape Verde, France, Russia, Suriname and the U.S. Ngannou was the sole representative of both Cameroon and France while Rozenstruik solely represented Suriname.

"I don't want to feel like something is controlling me, I'm a free man. With a title shot or without a title shot I'm still a man, I'm still a fighter…I can still make my statement & speak out for myself." – @Francis_Ngannou after his #UFC249 KO victory 🔊⬆️ pic.twitter.com/QQJF4TrPXh