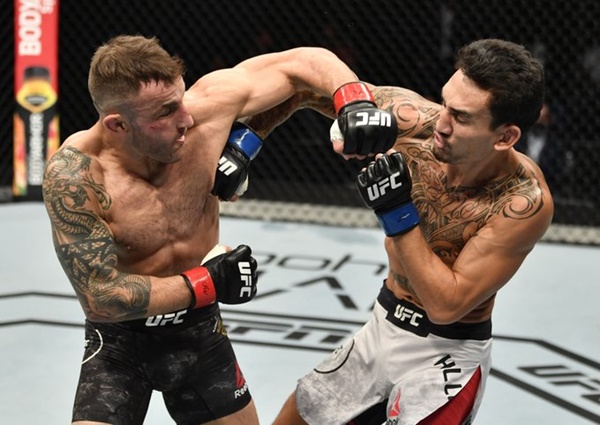 Alexander “The Great” Volkanovski, 31, of Windang, New South Wales, Australia is still the featherweight champion of the Ultimate Fighting Championship. The Macedonian-Greek-Australian mixed martial artist successfully defended his title at “UFC 251” on July 11, 2020 (or July 12, 2020 in the United Arab Emirates.

Herb Dean served as the referee of the title bout. After five five-minute rounds, the featherweight contest was left in the hands of the three judges.

Two judges scored it 48-47 in favor of Volkanovski while one judge also saw it 48-47 but in favor of Aldo. In the end, Dean raised the hand of the defending champion, who was declared the winner via split decision.

On the other hand, Aldo now has 28 wins and 7 losses. The Brazilian MMA fighter is riding a three-bout losing streak.

It was a rematch between Volkanovski and Holloway. The latter was the reigning UFC Featherweight Champion when he was dethroned by the former at “UFC 245” on December 14, 2019.

Including Australia, and the U.S., 12 countries were represented at “UFC 251.” The others were Brazil, Czech Republic, England, Finland, Kazakhstan, Nigeria, Poland, Russia, Scotland and Switzerland.

Volkanovski solely represented Australia. Holloway was one of the six fighters who represented the U.S.

I’m excited to be a part of the @blessedcbd family. The Blessed CBD products have helped me with my recovery and relaxation throughout my fight camp. All of Blessed CBD’s hemp comes from organic farms, with a 100% natural growing process, completely free of additives, pesticides, GMO’s and chemical solvents, allowing you to experience all of CBD’s wonderful benefits. ⠀⠀⠀⠀⠀⠀⠀⠀⠀⠀⠀ Blessed CBD are doing a massive giveaway in the next few days, so make sure to follow them! ⠀⠀⠀⠀⠀⠀⠀⠀⠀⠀⠀⠀ Currently available in the UK and Europe and coming soon to Australia and New Zealand! 🙌🏼 @blessedcbd.nz #BlessedCBD #ad #ufc251 #fightisland #ironic 😂

Born to a Macedonian father and Greek mother in Shellharbour, New South Wales on September 29, 1988, Volkanovski was 12 years old when he won a national title in Greco-Roman wrestling.

"I had to use all of my tools this fight. Everything in my arsenal, I had to use tonight. It just shows you the type of fighter Max Holloway is." – @AlexVolkanovski on his first title defense 🔊⬆️ #UFC251 #InAbuDhabi | @VisitAbuDhabi