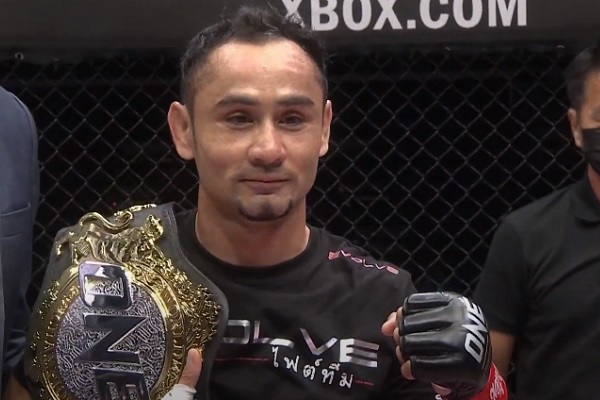 Sam-A Gaiyanghadao, 36, of Thailand is still the reigning champion of ONE Championship’s striking-only league ONE Super Series in Muay Thai in the strawweight division. He successfully defended his belt at “ONE: Reign of Dynasties.”

Featuring five MMA matches and one Muay Thai title bout, “ONE: Reign of Dynasties” was a closed-door event held at the Singapore Indoor Stadium in Kallang, Singapore on October 9, 2020. In the main event of evening, Josh “TimeBomb” Tonna, 32, of Australia challenged the reigning ONE Strawweight Muay Thai World Champion.

Johnny Chan served as the referee. Sam-A appeared composed and relaxed to start the bout, delivering a volley of fast boxing combinations and high round kicks in the first round.

In the beginning of the second round, Sam-A dropped Tonna with a bullet-like left straight, sending the Australian challenger to a mandatory 8-count. Sensing he had his opponent hurt, the defending champion poured on the pressure and dropped his challenger two more times en route to a technical knockout victory.

Chan put a stop to the title bout after 2 minutes and 30 seconds in the second round when Sam-A knocked out Tonna. It was the first successful title defense of the Thai defending champion, who is also the reigning ONE Strawweight Kickboxing World Champion.

Winning at “ONE: Reign of Dynasties” improved the professional Muay Thai and kickboxing record of Sam-A to 370 wins, 47 losses and 9 draws. He is training out of Evolve MMA in Singapore.

On the other hand, Tonna now has a professional Muay Thai record of 35 wins and 18 losses. He trains at Muay U in Fyshwick, Canberra, Australia.

On February 28, 2020, Sam-A became the inaugural ONE Strawweight Muay Thai World Champion at “ONE: King of the Jungle,” which was also a closed-door event held at the Singapore Indoor Stadium. He defeated Rocky Ogden, 20, of Australia via unanimous decision.

“We are honored that ONE Championship has been entrusted by the Singapore Government to pilot the return of international sports events for broadcast from Singapore,” ONE Championship group president Hua Fung Teh said days before the fight night. “We are thrilled to be able to bring our local and international heroes back to the Singapore Indoor Stadium to inspire martial arts fans in Singapore and around the world with their inspiring combination of heart, hard work and talent.”

Tagged as: Josh Tonna, ONE: Reign of Dynasties, Sam-A Gaiyanghadao