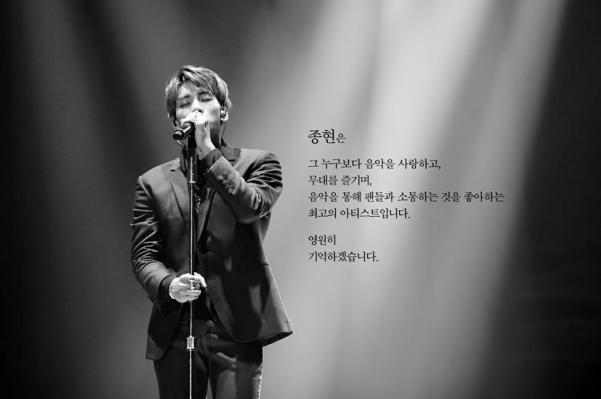 The K-Pop industry and fans from around the world are mourning the death of Kim Jong Hyun, 27, who was professionally known as Jonghyun. The cause of his death is yet to be confirmed but authorities are investigating the possibility that the death of the SHINee member was suicide.

Police received a call from Jonghyun’s sister Kim Sodam at 4:42 p.m. on Dec. 18, Monday, Korea Herald quoted the police as saying. She told the authorities that she received several text messages from her brother saying goodbye so she thought he may have attempted suicide.

Jonghyun was found unconscious at a rented apartment in Cheongdam-dong, Seoul, South Korea. There was a burning coal on a frying pan near the K-pop singer so the authorities are investigating the incident as a suspected suicide by carbon monoxide poisoning.

Several celebrities committed suicide by carbon monoxide poisoning in the past. Among them are rock musician Brad Delp in 2007, South Korean actor Ahn Jae Hwan in 2008, CPAmerica president and CEO Jack Wishna in 2012 and “Storage Wars” star Mark Balelo in 2013.

In a state of cardiac arrest, Jonghyun was rushed to the hospital after being found. A medical team performed cardiopulmonary resuscitation (CPR) on him but he was pronounced dead at the hospital.

Following the death of Jonghyun, SHINee is now a quartet. In 2008, S.M. Entertainment introduced Jonghyun as a member of the K-Pop group along with Lee Jin Ki, Kim Ki Bum, Choi Min Ho and Lee Tae Min, who are professionally known as Onew, Key, Minho and Taemin.

S.M. Entertainment consulted with the family of Jonghyun and decided that it was inevitable to adjust the times for attendees of the late SHINee member’s wake. In a statement obtained by All Kpop, the entertainment company noted that the Asan Hospital funeral parlor was meant to be used with other visitors and they are asking for fans’ understanding.

SHINee fans will be able to pay their respects to Jonghyun on Dec. 19, Tuesday, until 8 p.m. and on Dec. 20, Wednesday, from 12 p.m. to 8 p.m. The funeral on Dec. 21, Thursday, will be private and the details of the burial have yet to be announced.

From Dec. 9-10, Jonghyun performed solo concerts at SK Olympic Handball Stadium at Seoul Olympic Park. His first and only studio album as a solo artist titled “She Is” was released on May 24, 2016.

Watch the music video of “She Is” by Jonghyun here: