Kongsak P.K.Saenchaimuaythaigym earns 1st ONE Super Series win at ‘ONE: Clash of Legends’ in Bangkok, Thailand 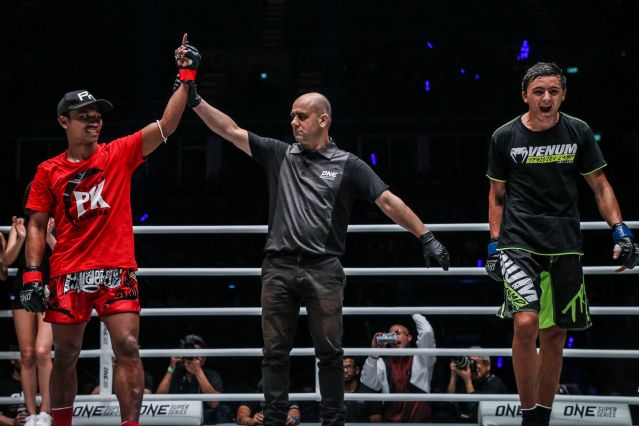 Kongsak P.K.Saenchaimuaythaigym, 28, of Thailand made his successful debut in ONE Championship’s striking-only league ONE Super Series on February 16, 2019. He defeated Alaverdi “Dagger” Ramazanov, 24, of Russia at “ONE: Clash of Legends” at the Impact Arena in Bangkok, Thailand.

“ONE: Clash of Legends” is the first ONE Championship event in Thailand in 2019 and it featured five Muay Thai contests and seven mixed martial arts bouts. In the co-main event of the evening, Kongsak and Ramazanov battled it out in a Muay Thai bout in the bantamweight division.

Elias Dolaptsis served as the referee of the bantamweight contest between Kongsak and Ramazanov.  In an exciting three-round affair, the two world-class strikers stood toe-to-toe and went back-and-forth as they traded blistering combinations.

After three three-minute rounds, the bout was left in the hands of the judges. In the end, Dolaptsis raised the hand of Kongsak, who was declared the winner via split decision.

Including Thailand and Russia, 14 countries were represented at “ONE: Clash of Legends.” The other countries were Cambodia, China, France, Indonesia, Japan, Malaysia, Mongolia, New Zealand, the Philippines, South Korea, the United Kingdom and the United States.

Check the complete “ONE: Clash of Legends” results on Top Sports Asia. Watch all the bouts here:

Tagged as: Alaverdi Ramazanov, Kongsak P.K.Saenchaimuaythaigym, ONE Championship, ONE Super Series, ONE: Clash of Legends