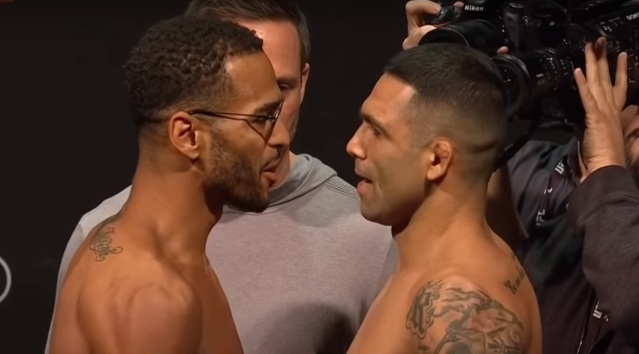 Claudio “Hannibal” Silva, 36, of London, England was one of the winners at “UFC Fight Night 147.” It was his fourth victory in the Ultimate Fighting Championship.

Kevin Sataki served as the referee of the welterweight bout between Silva and Roberts. Sataki put a stop to the contest after 2 minutes and 37 seconds in the third round when Silva submitted Roberts via armbar.

Winning at “UFC Fight Night 147” improved Silva’s professional MMA record to 13 wins and 1 loss. On the other hand, Roberts now has 16 wins and 4 loses.

Born in Rondonopolis, Brazil on September 6, 1982, Silva was 18 years old when he started his Brazilian Jiu-Jitsu training under the tutelage of Elan Santiago. In 2007, he moved to London and made his professional MMA debut.

In 2014, Silva made his debut in the UFC. The first three opponents he defeated in the American MMA promotion were Bradley “Bear” Scott, 29, of Melksham, Wiltshire, England, Leon “Rocky” Edwards, 27, of Erdington, Birmingham, England and Nordine Taleb, 37, of Montreal, Quebec, Canada.

The main event of “UFC Fight Night 147” was a welterweight bout between Darren “The Gorilla” Till, 26, of Liverpool, Merseyside, England and Jorge “Gamebred” Masvidal, 34, of Miami, Florida, United States. The American fighter, who is of Cuban and Peruvian descent, knocked out his English opponent in the second round.

In the co-main event, Edwards faced Gunnar “Gunni” Nelson, 30, of Reykjavik, Iceland in the welterweight division. The English contender won via split decision.

Including England, the U.S. and Iceland, a total of 11 countries were represented at “UFC Fight Night 147.” Silva and Roberts were two of the 11 fighters who represented in England.