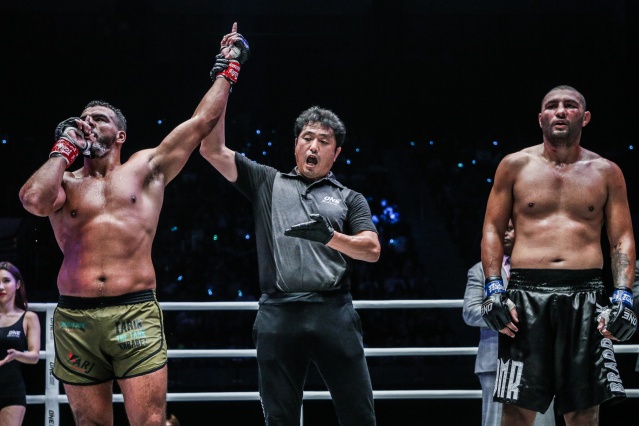 Tarik Khbabez, 27, of Morocco was one of the winners at “ONE: Legendary Quest.” It was the Moroccan-Dutch kickboxer’s fourth victory in ONE Championship’s striking-only league ONE Super Series.

Featuring three Muay Thai matches, two kickboxing contests and nine MMA bouts, “ONE: Legendary Quest” took place at the Baoshan Arena in Shanghai, China on June 15, 2019. In the ninth bout of the evening, Khbabez fought Anderson “Braddock” Silva, 32, of Sao Paulo, Brazil in a kickboxing contest in the featherweight division with Atsushi Onari as the referee.

After three three-minute rounds, the featherweight kickboxing contest was left in the hands of the judges. In the end, Onari raised the hand of Khbabez, who was declared the winner via unanimous decision.

Khbabez solely represented Morocco at “ONE: Legendary Quest” while Silva was one of the representatives of Brazil. Australia, China, Egypt, Indonesia, Japan, Malaysia, Myanmar, the Netherlands, the Philippines, Scotland, South Korea, Thailand and the United Kingdom were also represented.

Born in Rabat, Morocco on April 20, 1992, Khbabez started his karate training when he was 4 years old. At 16, he dropped out of school and dedicated himself to kickboxing.

“ONE: Legendary Quest” marked Khbabez’s fourth ONE Super Series bout. He is training out of Arj Trainingen in the Hague, Netherlands under the tutelage of Maikel Polanen.

When Khbabez made his ONE Super Series debut at  “ONE: Pinnacle of Power” at Studio City Event Center in Macau, China on June 23, 2019, he knocked out Alain “The Panther” Ngalani, 43, of Hong Kong. On October 26, 2018, the Moroccan-Dutch kickboxer knocked out Ibrahim “Mr. Cool” El Bouni, 25, of Morocco at “ONE: Pursuit of Greatness” at the Thuwunna Indoor Stadium in Yangon, Myanmar.

On March 8, 2019, Khbabez defeated Andrei “Mister KO” Stoica, 31, of Romania via unanimous decision at “ONE: Reign of Valor” at the Thuwunna Indoor Stadium.