Japan’s Ayaka Miura earns 2nd ONE Championship win, submits Samara Santos at ‘ONE: Dawn of Heroes’ in the Philippines 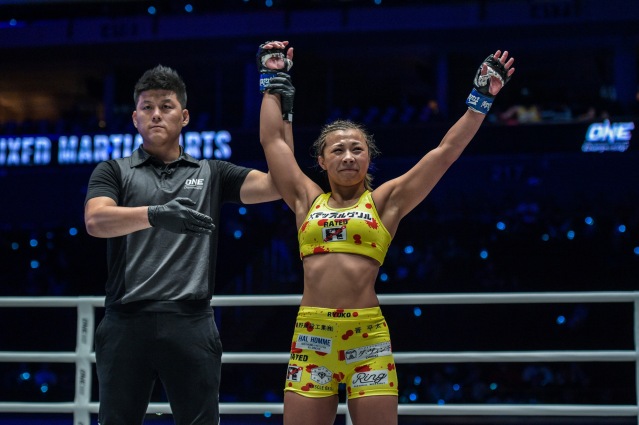 Training out of Tribe Tokyo MMA in Tokyo, Japan, Ayaka Miura, 28, was one of the winners at “ONE: Dawn of Heroes.” It was the second victory of the Japanese mixed martial artist in ONE Championship.

Featuring 12 mixed martial arts matches and two Muay Thai matches, “ONE: Dawn of Heroes” took place at the SM Mall of Asia Arena in Pasay City, Metro Manila, Philippines. In the second bout of the evening, Miura faced Samara “Marituba” Santos, 26, of Brazil in an MMA match in the women’s strawweight division with Kemp Cheng as the referee.

In the first round, Miura bucked a slow start. But in the second round, she displayed her superior grappling by taking Santos down.

Cheng put a stop to the strawweight contest after 39 seconds in the second round. Miura submitted Santos via Americana.

Winning at “ONE: Dawn of Heroes” improved the professional MMA record of Miura to 9 wins, 2 losses, 0 draw and 1 No Contest. Santos now has 11 wins, 7 losses and 1 draw.

Including Brazil and Japan, 12 countries were represented at “ONE: Dawn of Heroes.” The other countries were Australia, China, India, Indonesia, Italy, Malaysia, the Philippines, South Korea, Thailand, the United Kingdom, the United States and Vietnam.

“ONE: Dawn of Heroes” marked Miura’s second ONE Championship outing. She previously competed in DEEP Jewels and Pancrase.

On February 22, 2019, Miura made her ONE Championship debut at “ONE: Call to Greatness” at the Singapore Indoor Stadium in Kallang, Singapore. She submitted Laura “La Gladiadora” Balin, 39, of Argentina via Americana.

More photos of the bout between Miura and Santos are on Top Sports Asia. Here is a clip from the “ONE: Dawn of Heroes” press conference: