Malaysia’s Muhammad Aiman earns 6th ONE Championship win, beats Sunoto at ‘ONE: Dawn of Heroes’ in the Philippines 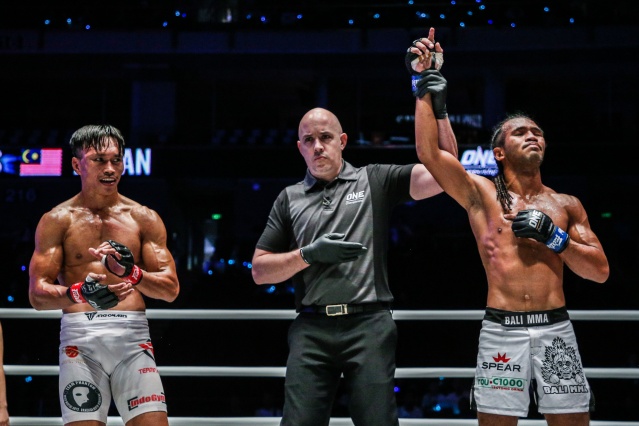 Training out of Bali MMA in Bali, Indonesia, “Jungle Cat” Muhammad Aiman, 24, of Malaysia was one of the winners at “ONE: Dawn of Heroes.” It was the sixth victory of the Malaysian mixed martial artist in ONE Championship.

Featuring 13 mixed martial arts matches and two Muay Thai matches, “ONE: Dawn of Heroes” took place at the SM Mall of Asia Arena in Pasay City, Metro Manila, Philippines. In the first bout of the evening, Aiman faced “The Terminator” Sunoto, 34, of Indonesia in an MMA match in the bantamweight division.

Olivier Coste served as the referee. Throughout the three-round bout, Aiman remained a step ahead as he outstruck and outgrappled Sunoto.

After three five-minute rounds, the bantamweight bout was left in the hands of the judges. In the end, Coste raised the hand of Aiman, who was declared the winner via unanimous decision.

“ONE: Dawn of Heroes” marked Aiman’s eighth ONE Championship outing. It was a redemptive win for him as he was coming out of a unanimous decision loss to Shuya “Stealth” Kamikubo, 24, of Japan.

Including Indonesia and Malaysia, 14 countries were represented at “ONE: Dawn of Heroes.” The other countries were Australia, Brazil, China, India, Italy, Japan, the Philippines, South Korea, Thailand, the United Kingdom, the United States and Vietnam.

Sunoto solely represented Indonesia. Aiman is also the only representative of Malaysia.

Aiman has been competing in ONE Championship since 2016. The first five opponents he defeated in the promotion were Hisyam “Zephyrus” Samsudin, 28, of Malaysia, Eduardo Novaes, 39, of Brazil, Yang Fei, 26, of China, Rin Saroth, 25, of Cambodia and “Rock Man” Chen Lei, 30, of China.

More photos from the bout between Aiman and Sunoto are on Top Sports Asia. Meanwhile, here is a clip from the “ONE: Dawn of Heroes” press conference: