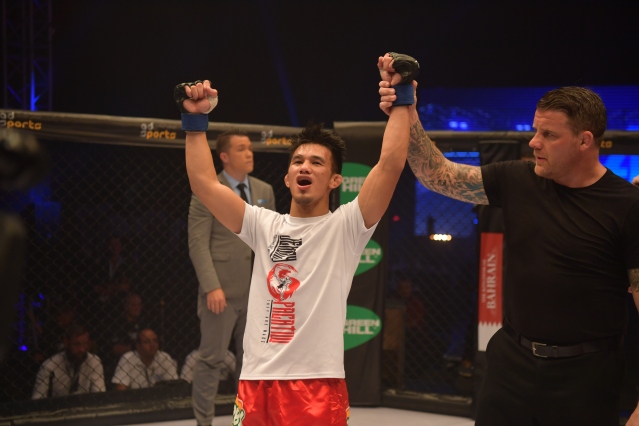 Representing Team Lakay, Igorot mixed martial artist Jeremy “The Juggernaut” Pacatiw, 23, is the sole representative of the Philippines at “Brave 29.” He will face Ali “The Royal Fighter” al-Qaisi, 29, of Jordan.

Brave Combat Federation will hold “Brave 29” at the Khalifa Sports City Arena in Isa Town, Bahrain on November 15, 2019. In the third bout of the evening, Pacatiw and Qaisi will battle battle it out in the bantamweight division.

The remaining three bouts are for the KHK World Championship, which are the two semi-final bouts plus the final. On October 14, 2019, Brave CF released the shortlist of 15 MMA fighters from the hundreds who applied for the tournament.

From the shortlist, only four will be chosen to compete at “Brave 29.” One will be reserved as an alternate.

Including the Philippines and Jordan, 16 countries will be represented. The others are Argentina, Bahrain, Brazil, Colombia, England, Georgia, Germany, Iraq, Ireland, Latvia, Russia, South Africa, Spain and the United States.

It marks Pacatiw’s ninth bout in Brave CF. Born on May 7, 1996, the Igorot MMA fighter has been competing professionally since 2015.

Pacatiw’s Brave CF debut at “Brave 2: Dynasty” in Bahrain in 2016 was not successful. He earned his first two victories in the promotion at “Brave 5” and at “Brave 8” both in 2017.

The Team Lakay fighter then had two consecutive losses at “Brave 9: The Kingdom of Champions” in Bahain. He then redeemed himself by scoring three consecutive wins at “Brave 14” in Morocco, “Brave 17” in Pakistan and “Brave 22: Storm of Warriors” in the Philippines.

While the Philippines only has Pacatiw as its representative at “Brave 29,” Jordan will be represented by two fighters namely Qaisi and former Brave CF Lightweight Champion Abdul-Kareem “Pride of Palestine” Al-Selwady, 23. Qaisi holds a professional MMA record of 7 wins and 3 losses.