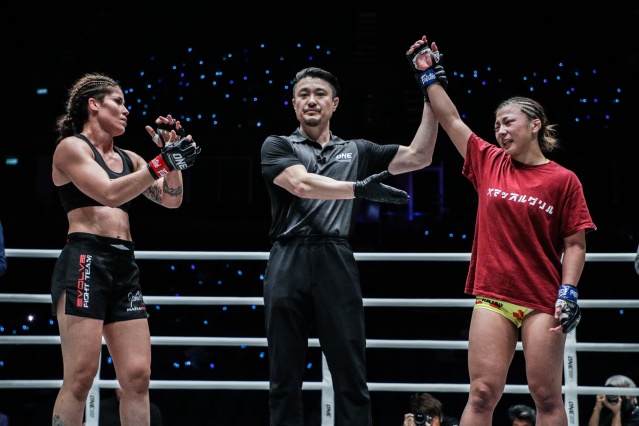 Fighting out of Nerima, Tokyo, Japan, Ayaka Miura (三浦彩), 29, has earned her third victory in ONE Championship. The Japanese mixed martial artist was one of the winners at “ONE: A New Tomorrow.”

Featuring six MMA matches, five Muay Thai contests and one kickboxing bout, ONE Championship held “ONE: A New Tomorrow” at the Impact Arena in Bangkok, Thailand on January 10, 2020. In the second bout of the evening, Miura competed in an MMA bout in the women’s strawweight division against Maíra Mazar, 34, of Sao Jose dos Campos, Sao Paulo, Brazil with Yoshinori Umeki as the referee.

On the mat, Miura went to her favorite scarfhold position to do damage. Umeki put a stop to the strawweight contest after 3 minutes and 1 second in the second round when Miura submitted Mazar via Americana.

Winning at “ONE: A New Tomorrow” improved the professional MMA record of Miura to 10 wins, 2 losses, 0 draw and 1 No Contest. It was her third ONE Championship bout.

On the other hand, it was Mazar’s ONE Championship debut. She now has 6 wins and 3 losses.

Including Brazil and Japan, 15 countries were represented at “ONE: A New Tomorrow.” The other countries were Algeria, China, France, India, Indonesia, Malaysia, Mongolia, the Philippines, Russia, Thailand, the United Kingdom, the United States and Vietnam.

Mazar was the only representative of Indonesia. She is training out of Evolve MMA in Singapore.

Miura was one of the three representative of Japan. She is training out of Tribe Tokyo MMA.

A former Pancrase fighter, Miura joined ONE Championship in 2019. In one year, she defeated two opponents namely Laura “La Gladiadora” Balin, 40, of Argentina and Samara “Marituba” Santos, 26, of Brazil.

“ONE: A New Tomorrow” was the first ONE Championship event to take place in 2020. Here is a recap:

‘ONE: Only the Brave’ results: Sittichai Sitsongpeenong vs David Kiria in Kallang, Singapore