Thailand’s Stamp Fairtex earns 6th ONE Championship win, knocks out India’s Puja Tomar at ‘ONE: A New Tomorrow’ in Bangkok 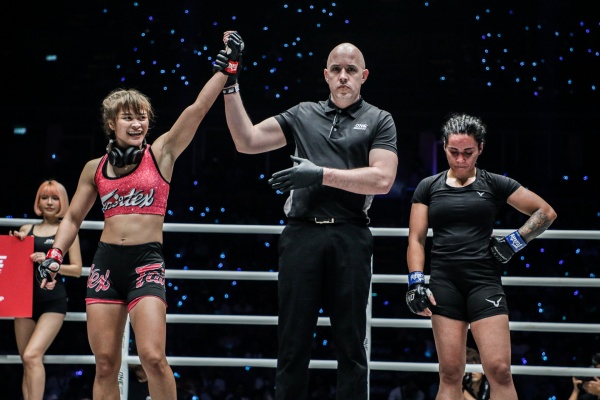 Professionally known as Stamp Fairtex, Natthawan Panthong (แสตมป์ แฟร์เท็กซ์), 22, has earned her sixth victory in ONE Championship. The Thai martial artist was one of the winners at “ONE: A New Tomorrow.”

Featuring six MMA matches, five Muay Thai contests and one kickboxing bout, ONE Championship held “ONE: A New Tomorrow” at the Impact Arena in Bangkok, Thailand on January 10, 2020. In the co-main event of the evening, Stamp competed in an MMA bout in the women’s atomweight division against Puja “The Cyclone” Tomar, 25, of India.

Olivier Coste served as the referee. A botched takedown attempt from Tomar led to Stamp taking her back and eventually getting to back-mount.

From there, Stamp began to punish Tomar with punches and elbows. Coste put a stop to the atomweight contest after 4 minutes and 27 seconds in the first round when the Thai contender knocked out her Indian opponent.

Winning at “ONE: A New Tomorrow” improved the professional MMA record of Magomedaliev to 4 wins and 0 loss. It was her sixth ONE Championship bout.

On the other hand, it was Tomar’s fifth ONE Championship bout. She now has 4 wins and 4 losses.

Including India and Thailand, 15 countries were represented at “ONE: A New Tomorrow.” The other countries were Algeria, Brazil, China, France, Indonesia, Japan, Malaysia, Mongolia, the Philippines, Russia, the United Kingdom, the United States and Vietnam.

Born in Rayong, Thailand on November 16, 1997, Stamp has been practicing Muay Thai since she was 5 years old. She was only 6 years old when she won her first fight.

At the age of 18, Stamp became the first ever female fighter to be sponsored by the Fairtex Gym in Pattaya, Thailand. On July 19, 2018, she made a successful debut as a professional MMA fighter by defeated Rashi “Champ” Shinde, 19, of India at “ONE Warrior Series 2.”

On October 6, 2018, Stamp dethroned the then ONE Kickboxing Atomweight World Champion “Killer Bee” Kai Ting Chuang, 24, of Taiwan at “ONE: Kingdom of Heroes” in Bangkok. On February 22, 2019, the Thai martial artist became the inaugural ONE Muay Thai Atomweight World Champion by defeating Janet Todd, 34, of the United States at “ONE: Call to Greatness” in Kallang, Singapore.

On June 15, 2019, Alma Juniku, 18, of Australia failed to dethrone Stamp as the reigning ONE Muay Thai Atomweight World Champion at “ONE: Legendary Quest” in Shanghai, China. As a professional MMA fighter, Stamp defeated two opponents in ONE Championship before facing Tomar at “ONE: A New Tomorrow.”

Stamp submitted Asha “Knockout Queen” Roka, 21, of India at “ONE: Dreams of Gold” in Bangkok on August 16, 2019. The Fairtex Gym representative defeated Bi “Killer Bee” Nguyen, 30, of Vietnam and the U.S. at “ONE: Masters of Fate” in Pasay City, Metro Manila, Philippines on November 8, 2019.

“ONE: A New Tomorrow” was the first ONE Championship event to take place in 2020. Here is a recap: