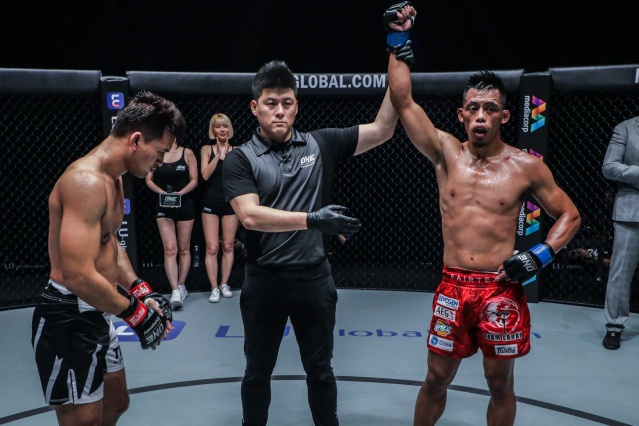 Former ONE Featherweight World Champion Honorio “The Rock” Banario, 30, of Mankayan, Benguet, Philippines was one of the winners at “ONE: King of the Jungle.” It was the ninth ONE Championship victory of the Igorot mixed martial artist, who is training out of Team Lakay in La Trinidad, Benguet.

Featuring one Muay Thai title bout, one kickboxing title bout and nine MMA matches, “ONE: King of the Jungle” was a closed-door event held at the Singapore Indoor Stadium in Kallang, Singapore. In the fourth bout of the evening, Banario competed in an MMA match in the featherweight division against OneShin Striking System creator Shannon “One Shin” Wiratchai, 31, of Thailand.

Olivier Coste served as the referee. Over three full rounds, the two former lightweights went to war, meeting each other at the center of the cage with their best offense.

Wiratchai dazzled behind a consistent left round kick which found a home on Banario’s chin. But the Team Lakay representative showcased beautiful boxing and a relentless takedown game that saw him in top position for the majority of the contest.

After three five-minute rounds, the featherweight contest was left in the hands of the judges. In the end, Coste raised the hand of Banario, who was declared the winner via split decision.

Winning at “ONE: King of the Jungle” improved the professional MMA record of Banario to 14 wins and 10 losses. On the other hand, Wiratchai now has 9 wins, 6 losses, 0 draw and 1 No Contest.

Including Thailand and the Philippines, 13 countries were represented at “ONE: King of the Jungle.” The others were Australia, Canada, Egypt, India, Japan, New Zealand, Russia, Singapore, South Korea, Taiwan and the United States.

Training out of Bangkok Fight Lab and Tiger Muay Thai, Wiratchai was one of the three fighters who represented Thailand. “ONE: King of the Jungle” marked his 14th ONE Championship bout.

Banario was one of the three representatives of the Philippines. “ONE: King of the Jungle” marked his 19th outing in ONE Championship, making him one of the athletes with the most bouts in the promotion.