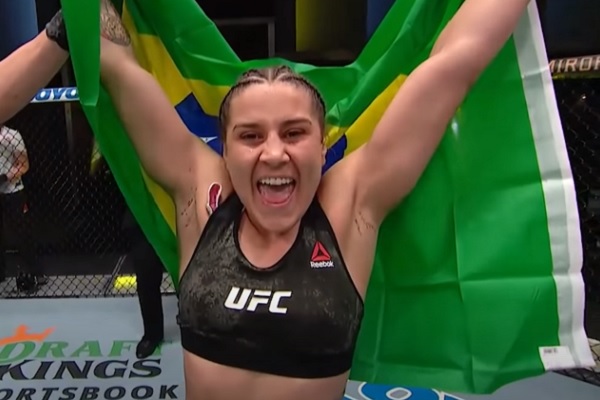 Jennifer Maia, 31, of Curitiba, Parana, Brazil was one of the winners at “UFC Fight Night 173,” which was also called  “UFC on ESPN+ 31” and “UFC Vegas 5.” It was the Brazilian mixed martial artist’s third win in the Ultimate Fighting Championship.

Jason Herzog served as the referee. He put a stop to the flyweight contest after 4 minutes and 29 seconds in the first round when Maia submitted Calderwood via armbar.

Maia and her fellow Brazilian MMA fighter Vicente “The Silent Assassin” Luque, 28, were the recipients of the Performance of the Night bonuses. The rematch of lightweights Bobby “King” Green, 33, of Redlands, California, USA and Lando “Groovy” Vanata, 28, of Toms River, New Jersey was declared the Fight of the Night.

Four countries were represented at “UFC Vegas 5” namely Brazil, Jamaica, Scotland and the U.S. Calderwood represented Scotland while Maia was one of the two fighters who represented Brazil.

Winning at “UFC Vegas 5” improved the professional MMA record of Maia to 19 wins, 7 losses and 1 draw. It was the fourth time she submitted an opponent via armbar in a professional MMA bout.

On the other hand, Calderwood now has 14 wins and 5 losses. She has been competing in the UFC since 2015.

Maia was born in Curitiba on October 6, 1998. She holds a professional boxing record of 3 wins and 0 loss.

In 2018, Maia made her debut in the UFC. The firs two opponents she defeated in the promotion were Alexis Davis and Roxanne Modafferi.