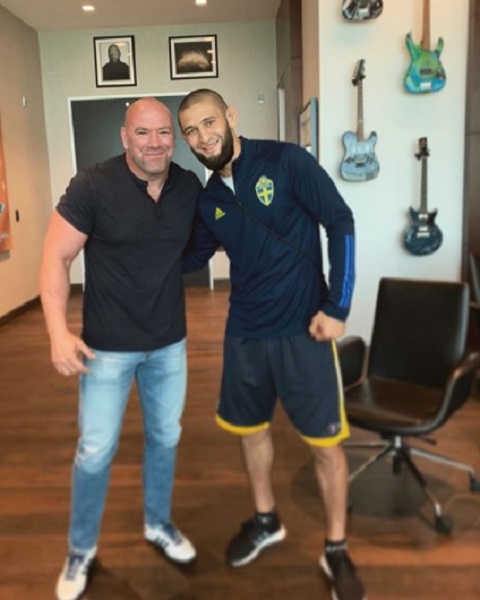 Khamzat “Borz” Chimaev (Хамзат Чимаев), 26, of Stockholm, Sweden is currently one of the most talked about fighters in the Ultimate Fighting Championship. The undefeated Chechen-Swedish mixed martial artist is now in a love quadrangle with Markus “Maluko” Perez, 30, of Sau Paulo, Brazil, Stephen “Wonderboy” Thompson, 37, of Simpsonville, South Carolina, United States and Leon “Rocky” Edwards, 29, of Erdington, Birmingham, England.

Perez competes in the middleweight division while Thompson and Edwards are both welterweight athletes. Chimaev fights in the both divisions and was previously reported to fight Demian Maia, 42, of Santana de Parnaiba, Sao Paulo.

On September 19, 2020, Chimaev earned his third UFC win by knocking out Gerald “GM3” Meerschaert, 32, of Racine, Wisconsin, USA after just 17 seconds in the first round at “UFC Fight Night 178,” also known as “UFC on ESPN+ 36″ or “UFC Vegas 11,” at the UFC APEX in Las Vegas, Nevada, USA. The winner became the MMA fighter with fastest first three consecutive wins in the UFC as it took him only 66 days to earn the wins.

Perez was supposed to fight Rodolfo “The Black Belt Hunter” Vieira, 30, of Rio de Janeiro, Brazil at “UFC Fight Night 179,” also known as “UFC on ESPN+ 37,” on October 11, 2020 at the Flash Forum on Yas Island, Abu Dhabi, United Arab Emirates. However, the latter withdrew due to undisclosed reasons on September 21, 2020.

On September 22, 2020, Thompson took to Twitter to make his first ever callout by challenging Edwards. Before the response of Edwards, Chimaev chimed in and asked Thompson to fight him instead.

Before joining the UFC, Chimaev competed in International Ring Fight Arena, Fight Club Rush and BRAVE Combat Federation. Training at the AllStars Training Center in Stockholm, he made his UFC debut at “UFC on ESPN 13” on July 16, 2020 on the UFC Fight Island on Yas Island where he submitted John “The Welsh Wrecking Machine” Phillips, 35, of Swansea, Wales via D’Arce choke in the middleweight division.

On July 26, 2020, Chimaev was one of the six Performance of the Night winners at “UFC on ESPN 14” on the UFC Fight Island after knocking out Rhys “Skeletor” McKee, 25, of Ballymena, Northern Ireland via punches in the welterweight division. The Chechen-Swedish MMA fighter now holds a professional MMA record of 9 wins and 0 loss.

"If you win your fights like that, everybody love you."@kchimaev talks about suddenly being one of the most popular fighters in MMA with his 3rd consecutive 2020 finish victory at #UFCVegas11 https://t.co/VB4MGpq563 pic.twitter.com/d3SXMEr8FX

Daniel Caldwell biography: 13 things about US Capitol riot suspect from The Colony, Texas